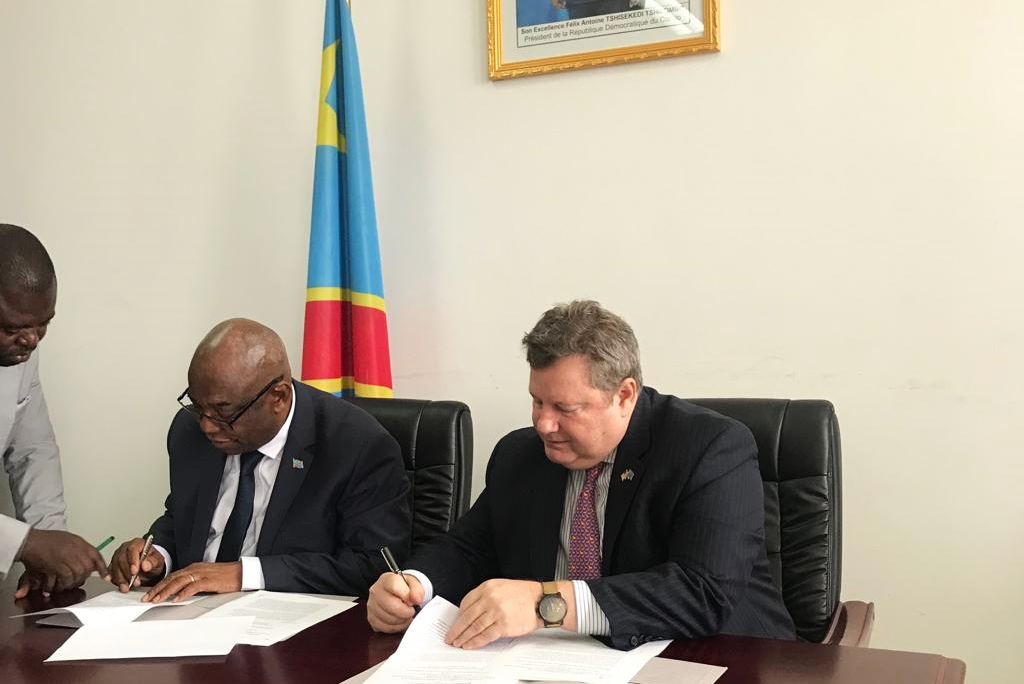 U.S. Ambassador, Mike Hammer, signing a letter of agreement with Vice Prime Minister and Minister of the Interior, Security, and Customary Affairs, Gilbert Kankonde, that will provide an additional $10 million in assistance to enhancing security and fighting corruption.

Subject: U.S. to provide $10 million to strengthen anti-corruption and anti-crime institutions under the Privileged Partnership for Peace and Prosperity

Kinshasa, DRC– On September 26, U.S. Ambassador Mike Hammer signed a letter of agreement with Vice Prime Minister and Minister of the Interior, Security, and Customary Affairs Gilbert Kankonde that will provide an additional $10 million in assistance to support the government and civil society with enhancing security and fighting corruption as part of U.S.-DRC Privileged Partnership for Peace and Prosperity.  In the upcoming weeks and months, the U.S. government – through the State Department’s Bureau of International Narcotics and Law Enforcement Affairs (INL) – will work with its Congolese partners to determine different programmatic priorities, such as training, equipment, and technical assistance to law enforcement, finance, justice sector and civil society.

“By signing this agreement, the United States demonstrates its commitment to supporting the new Congolese government’s change agenda and emphasis on combatting corruption.  And, we do so within the framework of our U.S. DRC Privileged Partnership for Peace and Prosperity established after President Tshisekedi’s visit to Washington this past April,” remarked Ambassador Hammer.

In addition to expanding support to combat corruption, the updated agreement will continue support to the DRC’s police reform efforts.  INL trains and equips community police programs in Lubumbashi and Mbuji Mayi and provides assistance to law enforcement and judicial actors to protect borders, combat trafficking, and improve the rule of law.

“A police force that conducts itself professionally is critical to ensuring the security of its people and safeguarding its natural resources so that they can benefit its citizens,” said Ambassador Hammer.  “Citizens have a right to demonstrate and express themselves peacefully, and without fear of repression.  We appreciate Minister Kankonde’s expressed commitment to ensuring that is the case in the DRC.”