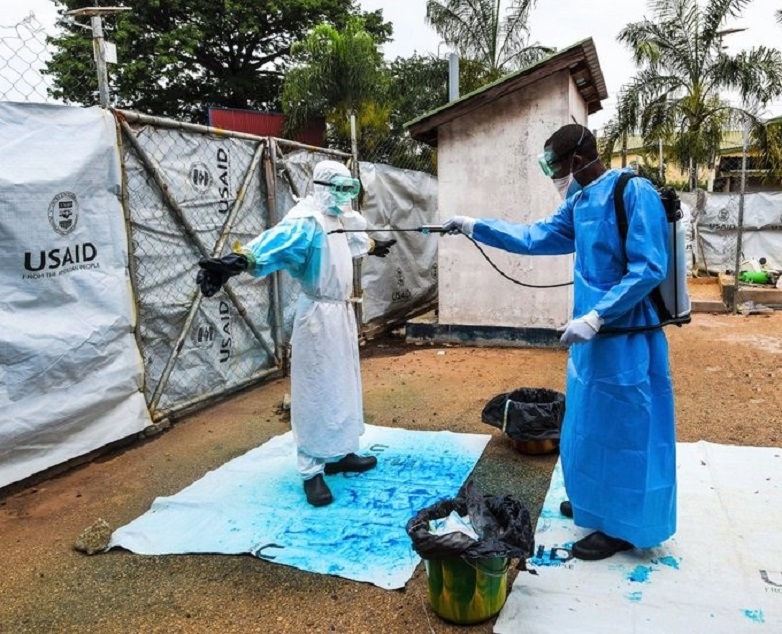 USAID DART and CDC Teams have been on the ground since September 2018, working with the U.S. Embassy in Kinshasa, humanitarian partners, and the Government of the DRC to bring this outbreak under control.

The United States, through the U.S. Agency for International Development (USAID) is providing more than $38 million in additional assistance to help end the ongoing Ebola outbreak in the Eastern Democratic Republic of Congo (DRC), including $15 million in new funding to the World Health Organization. This brings the total USAID funding for the response to Ebola to more than $136 million since the beginning of the outbreak in August 2018.

With this funding, the United States is providing lifesaving assistance, through on-the-ground partners, including activities to prevent and control infections in health facilities, enhanced surveillance for the disease, training for health care workers, community-engagement efforts, the promotion of safe and dignified burials, and food, to support people and communities affected by Ebola. In addition, the United States is funding critical preparedness efforts in the neighboring countries of Burundi, Rwanda, South Sudan, and Uganda. The funding announced today is in addition to contributions from other U.S. Departments and Agencies and the U.S. private sector.

The current outbreak of Ebola is the second largest ever recorded, with 2,592 confirmed and probable cases and at least 1,743 related deaths as of July 22. The DRC has fought and controlled nine other outbreaks of Ebola successfully, with the help of the international community; however, this response has a unique set of obstacles because of the ongoing conflict in North Kivu and Ituri Provinces. Continuing insecurity and difficulty in earning community trust are major hurdles. A robust, unified response by the Government of the DRC, the United Nations, other neighboring countries, the United States, and the international community in partnership with local communities is critical to stopping the spread of the disease.

The U.S. Government’s Disaster-Assistance Response Team-composed of disaster and health experts from USAID and the U.S. Centers for Disease Control and Prevention within the U.S. Department of Health and Human Services-has been on the ground since September 2018, working with the U.S. Embassy in Kinshasa, humanitarian partners, and the Government of the DRC to bring this outbreak under control. The United States is the largest single country donor to the Ebola response, and remains committed to helping the people affected by this outbreak. However, responding to this Public Health Emergency of International Concern requires a concerted effort from the entire international community. As we continue to scale up our assistance, we strongly encourage other donors to provide additional funding to help end this outbreak.