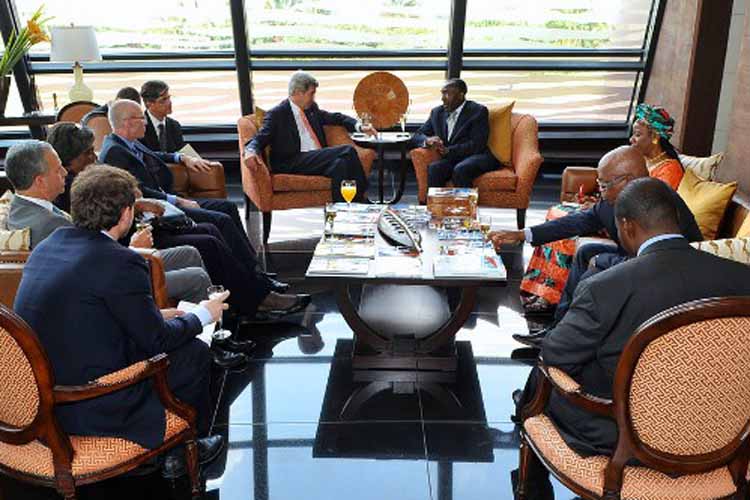 From May 3 to 4, 2014, Secretary of State John Kerry visited Kinshasa as part of an African trip that brought him to Addis Ababa, Ethiopia; Juba, South Sudan; and Luanda, Angola.

On May 3rd, U.S. Secretary of State Kerry met with Foreign Minister Raymond Tshibanda for a brief meeting at the airport before visiting a medical supply store funded with micro-finance provided by a non-profit run by a Young African Leaders Initiative (YALI) alumna.  Secretary Kerry then met with U.S Embassy staff and their families before meeting with several YALI finalists and alumni, an event that was followed by a meeting with the UN Special Representative Martin Kobler.

On May 4th, Secretary Kerry met with DRC President Joseph Kabila, followed by a press conference in which he announced that the United States will make $30 million available in additional funding in order to support transparent and credible elections as well as recovery and reconstruction programs in the eastern D.R.C.  “This contribution comes on top of already substantial U.S. assistance for economic development for the Congolese people. USAID plans to invest $1.2 billion over the next five years in the D.R.C., focusing on improving political and economic governance and on promoting social development”, he said, adding that “Our programs will strengthen Congolese institutions and improve their ability to respond to the peoples’ needs, and that includes the delivery of critical healthcare and education services.”

On the same day, Secretary Kerry held a meeting with local civil society representatives on the topic of democracy and fair elections in the DRC before visiting the USAID-funded Fistula Clinic at Saint Joseph hospital. At the hospital, he praised the efforts of the hospital’s team for providing care to women suffering from fistula, a “very debilitating, degrading, and unbelievably painful, horrible condition that seals the future of these young women.”