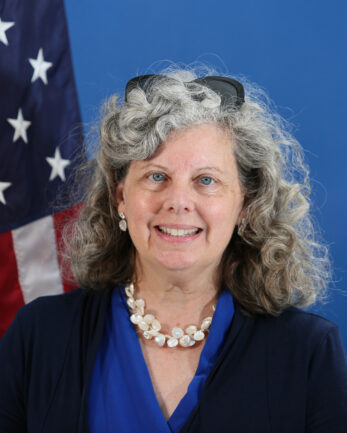 Stephanie Miley has served as an American diplomat for more than three decades, working on economic, political-military, and post-conflict stabilization issues.  Her Washington assignments include serving as a Director for Iraq at the National Security Council and as Special Assistant on the staff of Secretary of State Madeleine Albright.  Her overseas assignments have been in the Dominican Republic, Finland, the Sinai Desert, Kosovo, two tours in Iraq, and Belgium where she served at NATO as the Political Advisor to the Supreme Allied Commander Europe (SACEUR).  She was Minister Counselor for Economic and Environment, Science, Technology, and Health Affairs at the U.S. Embassy in Mexico from 2014-2016 and served as Chargé d’Affaires in Morocco from 2017-2019.   Most recently she was a Senior Advisor to the Under Secretary of Economic Growth, Energy, and the Environment.

Ms. Miley received her B.S. from the University of Notre Dame and continued graduate studies in biochemistry at Boston College.  She received an M.S. from Stanford University and is a Distinguished Graduate of the National War College.  Prior to joining the Foreign Service in 1990 she was a Peace Corps Volunteer in Ecuador and did research in the Central Neurochemistry Lab at the National Institutes of Health.  She speaks Spanish and French.  She is married and has one child.