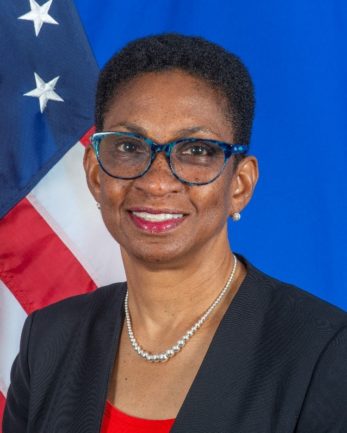 Marion Ekpuk, a member of the Senior Foreign Service, is the Deputy Chief of Mission in Kinshasa.  Most recently, she was the Senior Advisor for Diversity and Inclusion in the Bureau of Human Resources.  Prior service includes Executive Director for the Economics and Business Affairs and Energy Resources bureaus, Deputy Director of the 2015 Quadrennial Diplomacy and Development Review process and report, Director for Leasing in the Bureau of Overseas Buildings Operations, Political Director in Kandahar, and Assistant Public Affairs Officer in The Hague.  Earlier overseas assignments include the Republic of Benin, Nigeria, and Mexico.  Domestic tours also include service as Senior Watch Officer in the Operations Center and country officer for Nepal.

Ms. Ekpuk earned a B.A. in Political Science from Stanford University and an M.S. in National Security Strategy from the National War College.  She holds an Executive Certificate in Facilitation from Georgetown University.  Her foreign languages are French, Spanish, and Dutch.