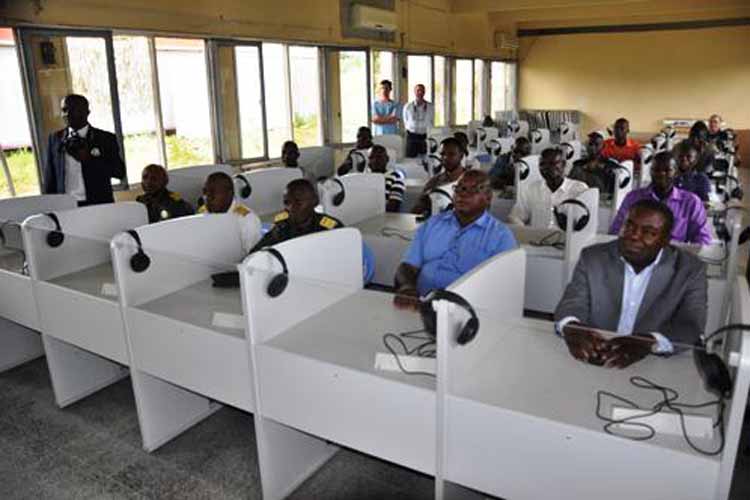 During the last week of February, the Embassy’s Office of Security Cooperation organized a DIILS training on the rule of law for 2,000 new recruits of the DRC army and the inauguration of English labs in military academies in two DRC cities (Kinshasa and Kananga), as well as an all-female civil military operations(CMO) training.

During the DIILS training- the largest event in DIILS history- 2, 000 new FARDC recruits have been trained to human rights prior to their deployment.

The English labs inaugurated in Kinshasa and Kananga are sponsored by the Embassy’s Office of Security Cooperation within its International Military Education and Training (IMET) program. They are equipped with updated digital material and replaces the previous lab installed 10 years ago. As noted by the US Embassy’s Defense Attaché colonel Nicolas Lovelace, the aim of this English language training program includes giving FARDC students in-country instruction so they can learn enough English to participate in trainings in the continental United States.

28 women of the FARDC completed a 3-week Civil Military Operations (CMO) training at the Kitona base, in the Bas-Congo province on March 7th. The training was the first all-female course organized by the US Embassy’s Office of Security Cooperation. It aimed at improving trainees’ behavior and addressed human rights violations and sexual gender based violence issues.

In his remarks at the closing of the training, the Kitona base commander General Mustapha Mukiza called the trainees to be a force for change in the status of female soldiers in the DRC army. The US Embassy Defense Attaché Colonel Nicolas Lovelace in turn emphasized the importance of a good relationship between the army and the population.