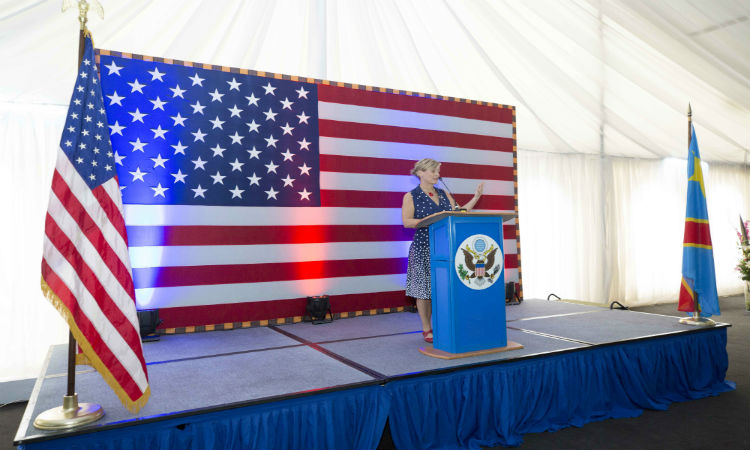 Welcome to our celebration of American Freedom! Two hundred and forty-two years ago, on July 4, 1776, the Continental Congress signed the United States Declaration of Independence.  Each year, we honor this historic moment.  Americans are known for being punctual, and this year we decided to out-do our reputation by advancing this year’s ceremony to June 27.  Thank you for joining us today for this early fête.

The Declaration of Independence was a formal statement by our nation’s original 13 colonies asserting their right to choose their own government.  Today, the document remains inspiring: it declares that we are all created equal, with rights that include life, liberty and the pursuit of happiness.  Perhaps most importantly, it states that a democratic government derives its power from the consent of its people.

Citizens speak with their votes.  Their votes are their voice.  Good leaders listen to those voices.  George Washington, the first president of the United States, served two terms in office and then, in 1796, Washington announced that he would not be a candidate for a third term.

Washington’s departure set a path for the first contested presidential election in the United States followed.  It was a contentious election.  Nonetheless, it was a peaceful transfer of executive power.

John Adams won that election in 1796, and his opponent from that election, Thomas Jefferson, became vice president.  Four years later, Jefferson was elected and became president in the second peaceful transfer of executive power.  After leaving the presidency, Jefferson, principal drafter of the Declaration of Independence, eagerly transferred his energies and ambitions to life as a successful private citizen, as a farmer, and inventor, and notably the founder of the nation’s first secular university—the University of Virginia.

Our nation’s early days of democracy were turbulent.  For various reasons, the country was barely governable in some regions, and political disagreements stemming from the vigorous clash of ideas among people of character were common. Indeed, one might say these characteristics continue to describe today’s American politics.  But it is this spirit of debate and peaceful disagreement that forges an enduring democracy.  Ultimately, open political discourse—including a vigorous free press,—while sometimes rude and uncomfortable—is what keeps a democracy vibrant; that political discourse leads to new ideas, better policies, and a stronger nation.

Over the years, the United States has worked hand-in-hand with the Democratic Republic of Congo on several priorities: including to increase economic growth and development, to improve access to healthcare and education, to promote peace and security, and to strengthen democratic institutions.

The United States government is the largest bilateral donor in the Democratic Republic of Congo.  We work closely with Congolese officials, teachers, scientists, entrepreneurs, and other leaders while providing approximately $500 million in development and humanitarian programming each year.  The United States government is the largest provider of humanitarian assistance in the DRC each year reaching millions of vulnerable Congolese with life-saving help.  Our health programs provide one-third of the Congolese population, or approximately 30 million people, with basic health services.  Our United States Agency for International Development, USAID, contributed $8 million to support the recent Ebola response led by the Government of the DRC, and our Centers for Disease Control has mobilized dozens of technical experts who are advising both the DRC Ministry of Health and the World Health Organization.

In our engagements across this vast and beautiful country, I feel privileged to work with so many dedicated and patriotic Congolese people.  I am honored to have here tonight each and every one of you — representing that impressive group.

The DRC is now at the precipice of a new beginning.  I believe that President Kabila can become a hero in Congolese history.  He can oversee his country’s first peaceful, credible, democratic transition of power.

This change is not the responsibility only of the government, but of the people.  Yes, change must come from the top-down through the preparation and implementation of credible elections this year.  But that will not be enough.  Change must come up also from the bottom.  That means each and every Congolese voter must turn out and vote.  And for that piece of the puzzle, I look to all of you.  Viewing this audience tonight, I am inspired by the talented leaders I see from all sectors of society, including academia, culture, business, civil society, government, and politics.  And I know that there are many, many more of you across this great nation.

The United States supports you as you pool your immense talents and together prove to the world that this country can and will move forward to build a strong, prosperous democracy, to use this country’s unparalleled resources—not only natural resources, but the resilient, invincible Congolese people—to use these resources to the benefit of the entire population.  We stand ready to accompany you toward such an accomplishment—and we know that you will make it happen.

As we celebrate 242 years of American independence, we reflect both on the courage of our Founding Fathers in charting a bold new democratic course, and on the many struggles in which our own citizens have engaged to protect and improve their republic.  Those struggles continue.  With the Democratic Republic of Congo’s Independence Day just three days from now – and its elections just six months from now – it is our belief that Congo’s democracy, too, can and will progress and strengthen itself.  The U.S. remains steadfast in our partnership with you to see that happen.  In the words of Ambassador Nikki Haley, “You have a lot of friends that want to see you be successful. We won’t give up until you have free and fair elections.

On behalf of all of the employees – both Congolese and American – at the Embassy of the United States in Kinshasa, thank you for joining us.  I invite you to continue to celebrate with us.  Happy Independence Day!