The “American Corner” is a United States Department of State-sponsored initiative inaugurated worldwide more than 10 years ago. Since 2000, the U.S. has launched 245 American Corners in approximately 60 countries. “American Corners” serve as regional resource centers for information and programs highlighting American culture, history, current events, and government. They typically host discussion groups, seminars, digital video conferencing (DVCs), poster exhibits, and meetings with U.S. and local specialists on a wide range of American-focused topics. They also act as a regional repository for the use of American-themed books, videos, DVDs, and CDs and provide free internet access and educational materials. Operated as partnerships, the U.S. provides equipment and materials while host-institutions provide staffing and the free use of space. However, the American Embassy in DRC has two American Corners and four American Shelves (MOU process underway with respective host-organizations) to date.

The U.S. Ambassador to the Democratic Republic of the Congo, James Christopher Swan, inaugurated the American Corner Limete in Kinshasa on Friday, August 8, 2014. Corner was closed for about one year and later reopened on Monday, August 7, 2017; and changed the naming from “American Corner Limete” to “Muhammad Ali American Corner of Limete”. Due to its new configuration, the Muhammad Ali American Corner Limete is currently ranked among the U.S. Government’s Priority Spaces across the world. On Monday, August 7, 2017 was the official opening ceremony day of the AMERICAN CORNER LIMETE to the public. This Space is located within the “Bibliothèque Urbaine de Kinshasa” (Urban Library of Kinshasa) – 3, Avenue Saint Christophe, 1ere Rue, District of Funa in the Limete Township. This reopening ceremony was conducted by the representatives of both partnership countries: Yolonda V. Kerney, the American Embassy’s Public Affairs Officer and Section-Chief, representing the Ambassador Dennis B. Hankins; and the DRC Kinshasa’s Provincial Minister of Education, Culture and Arts, who represented on his side, the Governor of Kinshasa, André Y. Kimbuta. Moreover, after the speeches’ time and ribbon cut ceremony, a general tour occurred to explain to the public the operationalization of the Corner. It is noticeable that the “Muhammad Ali” is a modern well-equipped American Corner with innovative technologies (Computers, IPad, Printers, and permanent connection).

Note: All the activities/Programs at the Muhammad Ali American Corner are free of charge to patrons.

The U.S. Ambassador to the Democratic Republic of the Congo, William Garvelink, inaugurated the American Corner UPC in Kinshasa on Tuesday, April 2, 2008.  It is located at the Protestant University of the Congo (UPC) – Crossing the Triomphal Boulevard and Avenue Du 24 Novembre. The American Corner UPC is a joint venture between the U.S. Embassy’s Public Affairs Section and UPC. It offers computers connected to the internet as well as reference resources, periodicals, and book collections designed to improve mutual understanding between the peoples of the United States and the Democratic Republic of the Congo. On-line reference searching enhances the ability of the Corner to provide the most up-to-date information to patrons. Several English learning interactive CDs/DVDs are very much appreciated, as they help improve patrons’ English level. The Corner’s patrons include UPC researchers who are interested in finding information on American social sciences; teachers, academics and students researching American history, culture and language.

Note: All the activities/Programs at the American Corner UPC are free of charge to patrons. 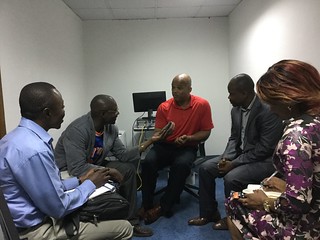