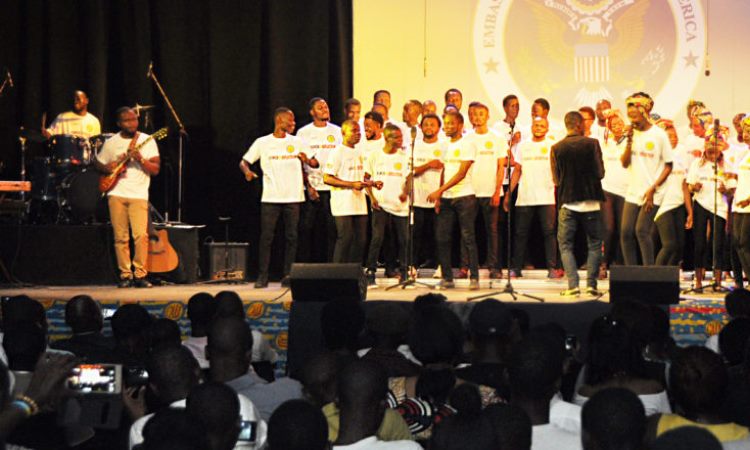 Despite Black History Month’s longevity in the United States, its three-year-old introduction to the Democratic Republic of the Congo by the U.S. Embassy through an annual gospel concert has ignited a love affair for music, storytelling, and celebration. This annual event attracts more than 1,200 people, including students, alumni, parents, and regular citizens. The Congo American Language Institute (CALI) nurtures this CALI Mass choir from the English clubs ranging from new English learners to alumni who love to sing.

This year’s concert featured songs from Negro Spirituals to Gospel Hip Hop, from Sam Cooke to Kirk Franklin. Students and alumni sung their renditions of these famous songs as the audience clapped, sung, praised and danced. Each year young and senior Congolese students walk the halls of CALI and read about famous African Americans and their struggle for equality and their triumphs of perseverance.  Students of the Access Program, which provides economically disadvantaged youth resources to study English for two years,  chose a speech to recite to their fellow students providing an analysis of what it means to them. Attendees were embraced with the meaning of Black History Month in American culture and have come to look forward to this annual event hosted by the U.S. Embassy.  Today, there are several local gospel choirs in Francophone Kinshasa who sing American gospel music in English.  It is even becoming common to hear an American gospel song in local dialects like Lingala.  Congolese often comment about the similarities of their struggle and with the messages in African Americans music.