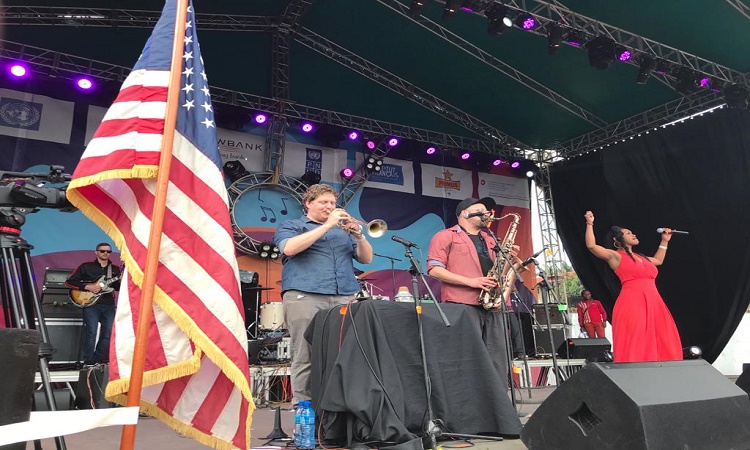 As part of ECA’s Arts Envoy Program, Eufórquestra, a Denver-based modern funk/roots/soul band, spent a colorful week in the DRC, from February 10 to 17, 2020. Starting in Kinshasa where they landed, Eufórquestra band members had a workshop on Tuesday February 11, 2020 with local musicians on entrepreneurship through music and women empowerment in the music industry. In the evening of the same Tuesday, they were hosted at the Deputy Chief of Mission’s Residence for a jam session with US Embassy Kinshasa band and some Congolese Jazz musicians.

Most of their stay in the DRC was spent in Goma, where they also had a workshop with local musicians a day before they performed at Amani Festival. Their performance on February 15 and 16, 2020 was cheered by a Congolese crowd of over 10,000, as they promoted regional peace and development. This seventh edition of Amani Festival (Amani- peace, in Swahili) brought together local, regional, and international bands to the 3-day event to encourage peace and unity in this part of the country affected by ongoing violence and Ebola outbreaks. The lively audience was especially enthusiastic when Eufórquestra played an old hit in Lingala by local star Papa Wemba. In a press conference after the performance, U.S. Embassy Kinshasa DCM Marion Ekpuk said the concert shows the U.S. Mission engages with Congolese society in the east on many levels: cultural, humanitarian, development, disease outbreak response, and more.