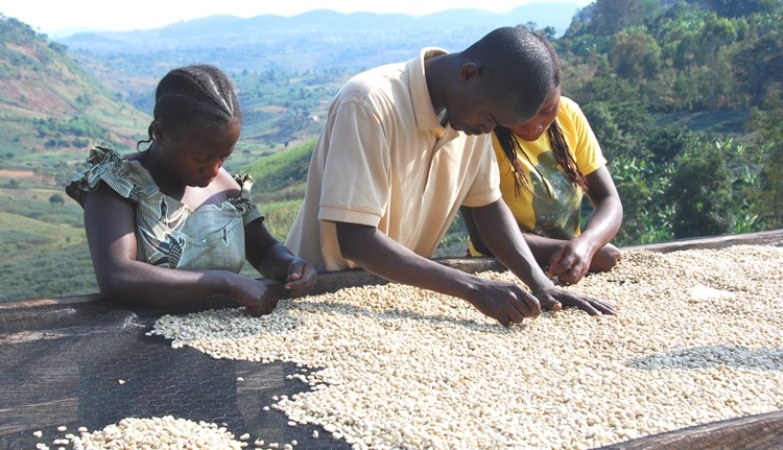 A group of farmers who received support as part of the USAID-funded coffee value chains activity in South Kivu. Through this activity, the coffee cooperatives supported by USAID learned how to improve the production of coffee cherries from harvesting to delivery to international buyers. Photo credi

USAID is proud to announce a new $23 million, five-year award: Feed the Future Democratic Republic of the Congo Value Chains activity. The goal is to increase household incomes and access to nutrient rich crops by linking 60,000 small-holder farmers in South Kivu to markets and suppliers. The activity will increase specialty coffee production and exports to increase farmer incomes, while also marketing nutritious crops such as beans to reduce malnutrition.

USAID/DRC Mission Director Christophe Tocco said, “Working hand in hand with the Congolese people, this new value chains activity will improve food security and give farmers and small businesses a viable legitimate income, supporting economic growth with the goal of establishing the foundation for a durable peace in eastern Congo.”

The new activity will build on the success of USAID’s previous coffee value chains activity, Kahawa Bora Ya Kivu. That activity reached over 5,000 farmers in South Kivu to improve production, post-harvest processing and marketing of specialty coffee. The new activity will also coordinate closely with USAID projects in health and Food for Peace in South Kivu, in addition to other USAID projects in the area.

This activity is funded by USAID as part of Feed the Future, the U.S. Government’s global hunger and food security initiative. Through Feed the Future, the U.S. Government partners with developing countries to unlock their potential for growth in the agriculture sector, link farmers to markets, transform economies and create a path out of poverty and hunger for millions, particularly smallholder farmers, many of whom are women.